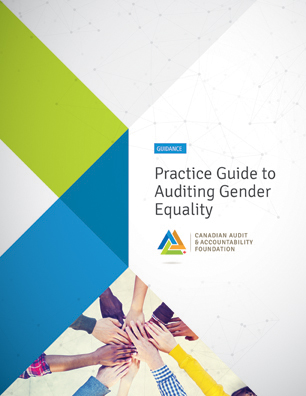 The promotion and attainment of gender equality is important for all countries to eliminate discrimination based on gender against women and girls, boys and men in social, cultural, political, and economic aspects of life. Gender equality ensures that all people, whether female or male, can actively and meaningfully participate in the development of their lives, communities, and societies, free from discrimination on the basis of being female or male. The need for gender equality has been widely recognized here in Canada and in developed and developing countries around the world.

CCAF is pleased to announce the release of our newest publication: Practice Guide to Auditing Gender Equality – A guide that will help public sector legislative and internal auditors to plan, carry out and report on audits that address gender equality.

How will this guide help?

Our new Practice Guide to Auditing Gender Equality aims to help public sector auditors in conducting performance audits on gender equality policies and programs, and on gender equality issues within broader audit topics. It examines gender issues from a Canadian and international perspective, and includes information and guidance on the following topics:

How was this guide developed?