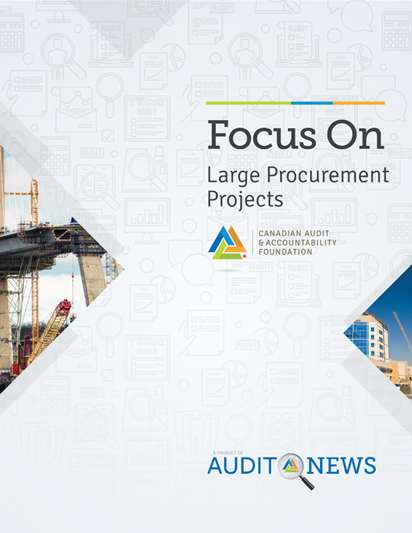 Large procurement projects, involving public infrastructure, equipment or service contracts, usually share several characteristics: they are complex, expensive and risky undertakings. And if they are not well managed, the consequences can be dramatic.

Cost overruns, delays and fraud are some of the most common issues associated with poorly managed large procurement projects in the public sector. Given the current efforts made by many governments to reduce deficits and limit spending, cost overruns on large procurement projects can adversely impact other programs, delay other investments or augment deficits and debt. One way or another, taxpayers end up paying more.

Project delays can also have serious consequences, especially when new infrastructure or equipment is required on a timely basis to replace ageing assets. In some cases, delays will force authorities to prolong the life of existing assets at a significant cost. In other cases, a decision may have to be made to close a public infrastructure or to ground a fleet of vehicles for safety reasons until a replacement is procured – a decision that will often result in a reduction of service and inconvenience for citizens.

Finally, large, complex procurement projects can be attractive targets for those seeking to commit fraud and corruption. The McGill University Hospital Centre in Montreal, a $1.3B P3 project in relation to which serious accusations of fraud and bribery have been laid against eight individuals, is a case in point.  Illegal actions were allegedly taken in this case to ensure that a specific company would be awarded the contract even though a competitor had submitted a better bid.

Auditing the management and oversight of large procurement projects can play an important role in fostering better procurement practices in the public sector and in increasing accountability for the spending or very large sums of taxpayers’ money. By reporting lessons learned and making recommendations that address the root causes of problems, performance auditors can also bring about change and reduce the likelihood that observed deficiencies and mistakes will be repeated in the future.