Revenues from the Extraction of Minerals

Nations that have vast mineral resources and that effectively oversee their development can derive many benefits from their extraction. Not only can extractive industries create numerous jobs and contribute significantly to economic growth, they can also be a significant source of revenues for governments. These revenues, in the form of royalties, lease payments, and other fees paid by private companies, can be spent to support government programs or to reduce public debt, or they can be saved for future generations.

Depending on natural resource abundance, industry development, and market conditions, revenues from the extraction of minerals can make up a large portion of a national or regional economy. In Sierra Leone and Mozambique, for example, the value of mining production in 2014 represented approximately 54 percent and 38 percent of national gross domestic product, respectively.

However, government revenues from minerals extraction can vary greatly from one year to the next, depending on the world’s economy, commodity demand, resource prices, exchange rates, industry development in each region, and other factors. Figure 1 shows the variation over time of government revenues from mining in a dozen countries where mining is an important economic activity. Figure 2 presents the variation in mining revenue received by the government of Ontario from 1995 to 2014. These variations are often due to changes in the price of commodities and in global economic trends. They can also result from a new royalty regime. For example, the province of Quebec collected $304 million in mining royalties in fiscal 2010–11, the year it implemented its new royalty regime. This was more royalty revenue than it had collected altogether in the previous 10 years ($289 million) under its previous regime.

Government Revenues from Mining as a Percentage of Total Revenues (average, minimum, and maximum for 2000 to 2013) 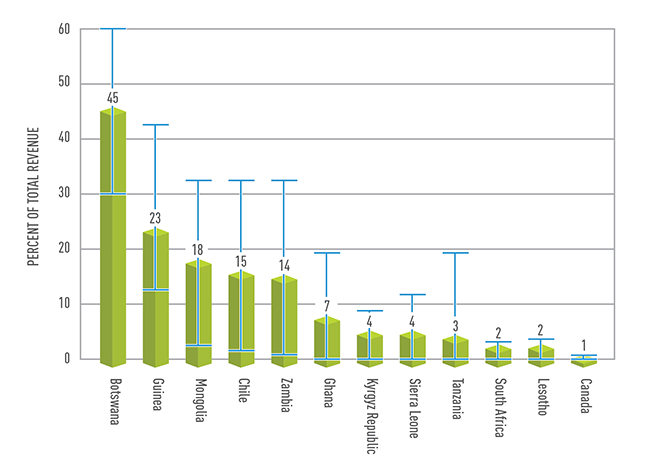 Source: Office of the Auditor General of Ontario (2015). Mines and Minerals Program

Boom and bust cycles have been common in the history of the mining sector and will continue to happen in the future as production and demand change and markets adapt to new circumstances. Accordingly, governments must consider this variation and uncertainty when they make decisions about how best to derive revenues from national or regional mineral resources. Royalties and the other main types of revenues that governments can collect from the extraction of minerals are described next.