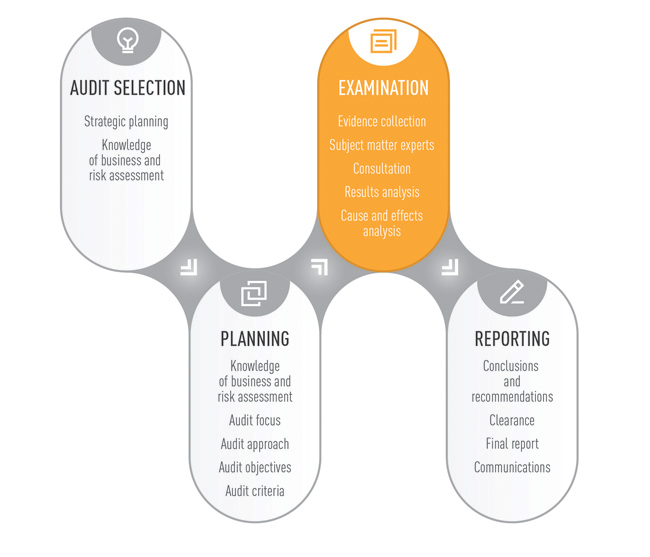 During the examination phase of a performance audit, audit teams must conduct procedures that will yield sufficient appropriate evidence to:

Audit conclusions can be based on one or more types of evidence, including:

Table 14 provides specific examples of evidence in each category. Each type of evidence can be useful in an audit of oversight but, in practice, documentary and testimonial evidence tend to constitute the main sources of evidence for audits that focus on the roles and responsibilities of oversight bodies.

Table 14 – Examples of Evidence Sources for Audits of Oversight

Using documentary and testimonial evidence to support audit observations on oversight and to reach an audit level of assurance is sometimes relatively straightforward. However, when it comes to questions related to an oversight body’s effectiveness or dynamics, there may be limited documentary evidence available and obtaining sufficient and appropriate evidence may therefore represent a challenge.

The remainder of this section briefly discusses the value, limitations, and potential challenges of each type of evidence that can be used to support conclusions in an audit of oversight. These reflect in large part the experience of practitioners who have audited oversight. Auditing and assurance standards and associated guidance materials may also be consulted by auditors for additional information.